I wonder if I’ll ever become disciplined enough to write a blog post once a week or even once every other week? I wonder if I will ever be able to complete my book project? I take a long time and go very slowly (that’s my name, S. Lowly!). The same is true of my jogging or now excercising at the gym–I go very slowly. I mull things over quite a bit, slowly digesting what is happening, gathering the thoughts and opinions and coming to my own, slowly.

So much has happened in these first weeks of 2017. Almost every day there is a new executive order signed by the man who is president of the United States, or a new hearing and confirmation of another person nominated for an administrative post. Some of the orders, some of the appointees, shocking, and awe-full. It’s a lot to wade through. And I started a new job too, an interim position as pastor of Living Faith United Methodist Church in Waukegan, Illinois. Starting over again with a new group of people after helping to close a church has also been a lot to go through. But after all of the shock and awe, I’m experiencing a new spirit, a toughness, not a spirit of fear or despair, but a spirit of reaching out, of bonding, of building up, and responding.

Temma and I went with Ellen to the Women’s March on Chicago. I’m glad we did. I think it was the beginning discovery of this new spirit, or an old spirit falling on me in a new way. I’ve told the story before and I write about it in my book, of going to Sojourners Community’s Peace Pentecost gathering in Washington D.C. the spring of 1985 when I was pregnant with Temma. There was a planned act of civil disobedience as part of the event, in protest of the nuclear arms build-up. After some people advised me not to be arrested in care for my baby, I agreed not to take part in the act. As I sat it out and prayed, I got in touch with the spirit of Dorothy Day who I’d read had sat in the very same place in Washington D.C. when covering a protest as a journalist but not participating because of her new-found commitment to the church. I prayed, as did Dorothy years earlier, for God to show me the way to be used as an instrument of peace in the world.

Temma was with me that day of Peace Pentecost Temma carries Dorothy’s name and spirit, Temma Day Lowly. Temma Day and I were part of the Women’s March. We are strong women. We are instruments of peace and of love in this world. This is what we have slowly been coming to. 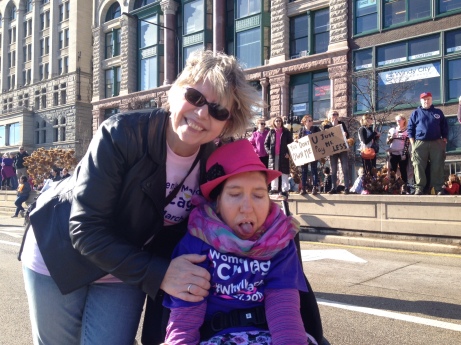 Dorothy Day’s granddaughter, Kate Hennessy has written a book about Day, Dorothy Day: The World Will Be Saved by Beauty. I haven’t read it yet, but I did read a review of the book in The Atlantic by James Parker. He writes: “Meekness was not in her nature. Her obedience, her submission–to the Church and to the poor–was as headlong and headstrong in its way as her benders with Eugene O’Neill had been. But it made her whole. Or rather it joined her to the whole.” (The Atlantic, March 2017)

One thought on “What Now?”